Why choose television by Init7?

Prefer TV7 or IPTV over OTT? Or do you prefer Netflix or Amazon Prime?

Television is no longer what it used to be. Watching whatever is on TV at the time was yesterday. According to the latest figures, people under 30 watch no more than an hour of TV at a time on a daily basis. Consequently, more and more full HD video streams frequently overload cables that are far too narrow to cope. However, with Fiber7, online TV and videos always run smoothly regardless of their source. We don't hinder the Internet TV of other providers - in fact, the opposite. We work in conjunction with content providers in order to ensure the best quality during prime time.

Our own service, TV7, supports multicast (with no picture lag), and naturally we look forward to you choosing us.

If you would prefer an OTT (over-the-top content) service from Teleboy, Wilmaa or Zattoo, that is also possible. There are optimal interfaces for all three providers. Needless to say, VoD (Video-on-Demand) services also run at top quality. Init7 has operated its own Netflix cache-server since it first came to Switzerland. Furthermore, there is dedicated connection capacity to Amazon, Apple, Google, YouTube and many more.

What you watch and how long you watch for is no concern at all to us as an Internet provider. All we care about is delivering the best possible video transmission. Compare Init7 against the others!

If you want to know how videos are transmitted over the Internet, then switch on Nerd Mode.

Internet television and video are causing data volumes to explode at the same time as quality demands are increasing. Watch a movie in low res is no fun, and nobody can stand having to see the buffering icon appear every five minutes while the video stream hangs for several seconds.

Consumer often blame the content provider (Netflix et al.) for a jerky picture where you can only see artifacts instead of fluid video. But this widely held belief is almost always wrong. In most cases, the internet provider is the one responsible, whose role is to provide optimal transmission capacity. Not all providers do that, because it's not completely free.

Cost is usually not the main factor however, but rather when a provider is trying to exploit a ‘two-sided market’ situation. This is when the provider is not content with income from subscribers and wants to make money from content providers as well. Often the former monopolists and big major cable providers like Deutsche Telekom, Swisscom and UPC are guilty of this behaviour, which negatively affects their own customers.

We believe this is the wrong way to do business. For if the content provider doesn’t pay a fee, the video data traffic flows through clogged interconnections, causing buffering and jerking. The Level3 graphic below illustrates the problem: 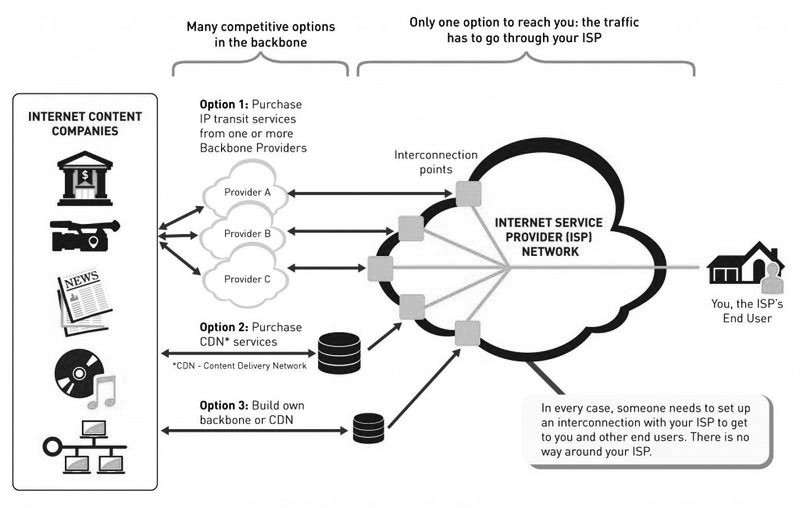 That's why Init7 has an open peering policy. We build interconnections (PNIs - Private Network Interconnection) to all providers without charging additional fees. We also operate cache servers of the content providers in our network, like the OpenConnect Server from Netflix. This optimizes the distribution of data traffic while improving quality.

Currently implemented (as of January 2017, only private capacities relevant for Swiss end customers are listed, without public peering):